Leukoplakia is one of the most common and potentially malignant or cancer causing lesion of the oral mucosa. Oral leukoplakia can be defined as “A predominantly white lesion of the oral mucosa that cannot be characterized as any other definable lesion; some oral leukoplakia will transform into cancer”. It is not a disease entity in itself. It is a body’s response, rather an adaptive response of healthy viable mucosa to a low grade, sustained irritant.

These are also called as precancerous lesions, which if ignored after not getting regressed could later on lead to any of the severe forms leading to Oral cancer. The most common people who get this are the elderly people, and the ones who have got a very low immunity level. The Oral Leukoplakia is even called as the disorder of the mucous. 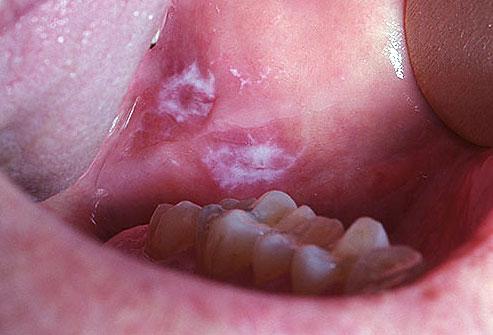 Of all the above possible reasons, the Tobacco chewing and smoking are considered to be the most common factors.
Many a times, there is a chance that the lesions of Leukoplakia can get regressed but that is when the causative factor is removed, and if in the early stages, the Gutkha, Pan or Tobacco chewing is stopped.

The various types of Oral Leukoplakia include:

These are the lesions which are uniformly white in color, and they are usually asymptomatic and thus the patient doesn’t have any complaint regarding the same unless the color change is noticed by them. These regularly have shallow furrows, and they have smooth surface or a rough one, but the texture is homogenous throughout the lesion. 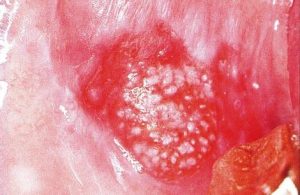 These are the lesions where a part of it is white in color, and a few parts are reddened. These lesions could be irregular, flat, nodular or exophytic. These are usually associated with complaints such as localized pain or discomfort in the area of the lesion, and these are to be well diagnosed, because there may be a presence of any possible malignancy if there is excessive reddishness in the lesion.

This is also a type of homogenous leukoplakia with a fissured texture. All over the lesion, it is the same texture but the there are fissues and a groovy appearance all over. This criss-cross type of appearance as cracks is common in Bidi smokers.

This is a type of non homogenous type of Leukoplakia with a nodular texture. This occurs in the latter stages when the same above lesions start developing surface irregularities in nodular or granular nature, and sometimes even pointed projections come out of the nodular texture, thus being called as Verruciform Leukoplakia in such conditions.

Hairy Leukoplakia – Not a true form of Leukoplakia, this occurs on the lateral aspects of the tongue and the Buccal commissures of the HIV infected patients, and these are quite distinctive having a rapid onset. These are basically formed due to the Epstein Barr virus, and is a form of Keratin hyperplasia looking quite similar to the Verruciform Leukoplakia.

The key to keep the disease away is by long-term follow up after the treatment, because there are a lot of chances of recurrence of the condition. A clinical evaluation every 6 months is recommended, for at least 2-3 years. If there is no recurrence till then, most of the risk is gone and no further follow-up would be necessary.