You are here: Home / Oral Hygiene / Foods that cause Bad Breath (Halitosis Causes)

Bad Breath is caused due to several factors, one of the major ones being the food that we consume in our day to day life, and the food which we cannot avoid, that being one of the ingredients in the several dishes that we make and consume. Although one cannot easily avoid eating those, they need to at least be totally aware of what causes the foul odor in the mouth, and when the proper care has to be taken after that food is eaten.

Firstly, we know a couple of ingredients which cause the bad odor but many wouldnít know the reason about it. Weíre talking about the Onions and Garlic which are known to cause the foul smell, but the actual reason behind it is the Sulfur compounds present in them, called the Mercaptans. 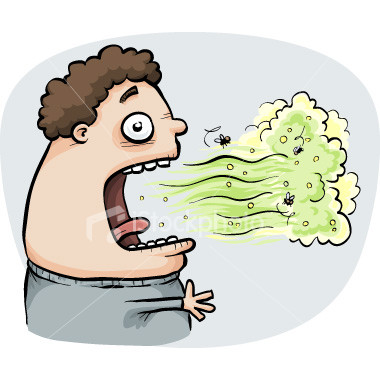 Volatile Sulfur Compounds are a group of those compounds which are easily turned to the vaporized state and spread around with the foul smell. The two commonly found ones are Hydrogen sulfide which comes with the rotten egg smell, and the Methyl Merceptan which produces a smell of the Skunk oil. When the natural flavor of the onions and garlic gets mixed with the saliva in the mouth, it brings out a pungent odor which can be easily noticeable by the people in the vicinity.

Why is Garlic so bad at smell?

Drying agents are the products which can be chemically called the Desiccants, and these would easily dry-out the wet areas. Alcohol is one of the most commonly taken desiccant which is even present in the mouthwashes, thus are known as one of the factors for the bad breath, which is caused when the saliva content in the mouth is less and the mouth becomes dry.

For all the reasons, check Causes of Bad Breath

When talking about this, we could make a huge list of food products which are acidic, and when we are calling it acidic, we mean it. The pH of the food that is converted here is low, thus the acidic content makes the bacteria more active in breaking down the food and produce the sulfur compounds which are foul smelling.
Some of the most common food products and especially the liquids which are known to be highly acidic and damaging to the teeth, as well as causing the bad breath, are as follows:

pH is the measure that calculates the acidity of the product, may that be a food item or anything. The oral cavity with good saliva is very less acidic, and the pH is around 6.5 (Neutral pH is 7).

The sugars are good when they are eaten in any form, but the goodness and sweetness lasts for just some time, and later everything bad happens. From bad bacteria attacking the teeth to the same bacteria producing stuff that is bad to smell. Sugary food products, such as the chocolates, candies, cookies, pudding and cakes etc. are all just a small part of the big list of foods which can cause the bad breath.

There are certain fluids that also are responsible for bad breath in mouth and you can learn which are these by checking fluids causing bad breath. If you are someone who is being told by others about your Halitosis and you didn’t realize it, here is how to check for bad breath at home.