Cancer is defined as an uncontrolled division of the cells and this causes invading of the other neighboring tissues in any region of the body. This condition usually can spread to any other part of the body through lymphatic system or the blood stream. Generally cancers can occur due to abnormal changes referred to as Mutations in the DNA of the cells, or also through genetic variations.

Now coming to Oral cancer, It is a cancerous condition that is seen in the oral cavity. There are nearly 4/10 million cases of Oral cancer diagnosed every year around the world.
Here i am stating out the overview with the types, causes, symptoms of Oral cancers with a few pictures. 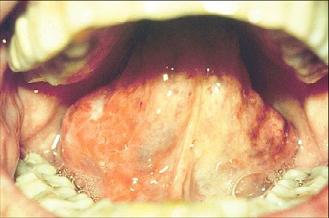 Oral cancer can arise initially as a primary lesion in the tissue. It may originate from various places, main which are included are Salivary gland, lymphoid tissue, tonsillar tissues or the cells of oral mucosa.
Based on these things, Oral cancer is classified into the following –
1. Teratoma – Which is caused from the histology of the oral tissues.
2. Adenocarcinoma – That occurs from the Saliva and tonsillar tissue or any one of them.
3. Melanoma – Occurring from the pigment producing cells of the oral mucosa. 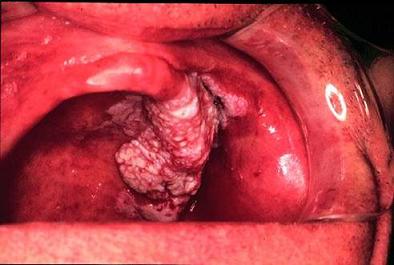 Then would just talk a few major points that lead to Oral cancer,
Causes of Oral Cancer –
– Tobacco, the most common cause for Oral cancer, which is almost considered to be the cause for about 75% of the cases of Oral cancers, which might include the Smoking tobacco and non-smoking or chewing tobacco. Tobacco has nearly 20 carcinogens and its combustion can damage the oral tissues.
– Alcohol, heavy drinking of which can cause oral cancer. These have a synergistic effect on person if he is a regular smoker plus an alcohol drinker. Smoking + Drinking together increases the risk of Oral cancer by 15 times.
– Human Papilloma Virus, called HPV, which is of more than 100 varieties is also one of the risk factors for cause of Oral cancer. The same virus of 16/18 varieties also is known for spreading cervical cancers.
– Studies have shown that a diet low in fruits and vegetables may put you more at risk for oral cancer, and other studies indicate that a diet high in fruits and vegetables may protect against many types of cancer.
– Prolonged exposure to the sun increases the risk of lip cancer. 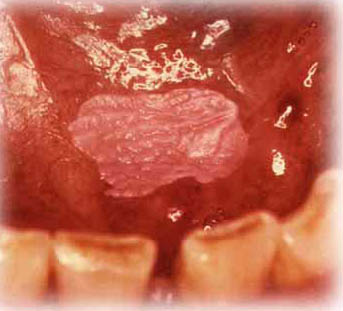 It is also necessary to discuss about the Symptoms of all the different stages of Cancer, listed down –
Symptoms of Oral Cancer –
1. Lesions in the skin of tongue, lip or any other mouth area.
2. Early symptom includes a white patch or red patch in the soft tissues of the mouth.
3. When the tumor starts increasing, there is a burning sensation.
4. In the later stages, it involves tongue problems, difficulty in swallowing
5. Pain and paraesthesia(numbness of the areas).
6. Loose teeth.
7. Rough, crusty or eroded spot that doesn’t heal.
8. Change in the way teeth fit together.
9. Any oral change or soreness that doesn’t go away or heal within two weeks. 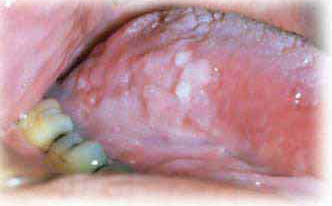 There are a few serious treatments that have been partly or mostly successfully in the Recent times
Treatment of Oral Cancer or oral surgery –
1. Glossectomy, which involves the removal of the part of tongue or the complete tongue is it is completely affected.
2. Radical neck dissection, in which there is removal of lymph nodes and other structures in the head and neck that are likely or proven to be malignant.
3. Mandibulectomy, in which the affected parts or the whole of the mandible(lower jaw) is removed.
4. Maxillectomy, in which the affected parts or the whole of the maxilla(upper jaw) is removed.
5. Moh’s procedure – Performed on cancers involving the skin in the oral region.
6. Laryngectomy, where the part or whole of the larynx is removed if it is affected with cancer.

This article was provided by Dr. Chetan and can be re-published with this link retained.