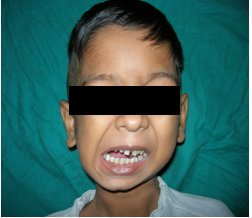 Temporomandibular Joint Ankylosis is the Hypomobility condition caused due to the fusion of the TMJ. This fusion of the joint leads to the stiffening and fixation of the joint at a particular position. This happens due to either the fusion of the bones in the joint, or else due to the formation of calcium deposits around the TMJ ligaments, and this can happen on either one side or both the sides. The ankylosis of the TMJ is of 2 types, i.e. True and False, which would be discussed further below. They are distinguished based on the position and the causing factor of the ankylosis, and the way the immobility of the Temporomandibular joint has occurred. Most of the time, the condition is chronic and painless, but sometimes the TMJ ankylosis may cause a little pain depending on the cause of the ankylosis, and while opening of the mouth.

The most common causes of the Ankylosis are the traumatic injuries and infections in and around the joint. The main causes for the Ankylosis of the Temporomandibular joint are –

Signs and Symptoms of TMJ Ankylosis

The problems that arise with the TMJ Ankylosis are psychological, morphological, Aesthetic and functional. The restricted function of the joint would affect the jaw movement, and the patient also suffers psychological problems due to the same. Below are a few features seen clinically in patients with TMJ Ankylosis –

If any motion is present in the jaws, while trying to open the mouth the chin deviates towards the side which is ankylosed. In children, the chin is also underdeveloped and receding chin is seen with micrognathia. Overjet due to the maxillary anterior teeth is seen as mandibular growth is less. The severity of the condition is checked by the dentist or practitioner by checking the range of mouth opening i.e. how wide the patient is opening the mouth, the deviation while opening the mouth and whether the patient is feeling discomfort while trying to open their mouth.

The True ankylosis is a dangerous type which causes severe psychological and physical disturbances. It is caused due to many reasons and is the one which causes severe problems to the movement of the jaw, the development of mandible and the chin, and this may be unilateral or bilateral. The “Bird Face” appearance is seen due to true bilateral congenital Ankylosis of the TMJ.
The False ankylosis is caused due to the enlargement of the coronoid process, or the depressed fracture of the zygomatic arch, scarring from surgery, irradiation or infection.

The signs and symptoms of the true ankylosis are more relevant and prominent when compared to the false ankylosis.

Radiographic examination is also an important part in the clinical assessment and diagnosis of the TMJ Ankylosis. Although there are no specific radiographic features seen, the joint still would show an irregularly shaped condyle of the mandible, and even there is a dense bone filling in the joint space which is indicative of the restricted movement of the mandible. 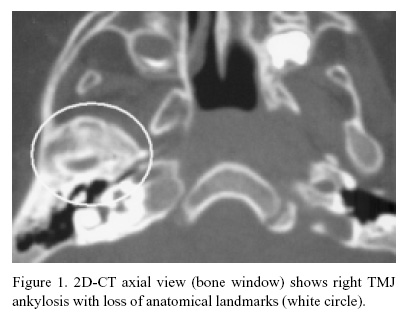 There are various treatment procedures for the TMJ Ankylosis and this condition can be corrected using different surgical and non-surgical methods.

If the condition is unilateral, the treatment is not as complex as that of the bilateral ankylosis, because the bilateral has not just the problem of the joint but also the development of the jaw and chin is affected and that needs to be corrected.
Apart from the above surgical procedures, there is therapeutic treatment given, which includes the Bisphosphonates, NSAIDs, and the practice of physiotherapy by jaw exercises after the condition is treated, to prevent the reankylosis of the TMJ. To maintain a good and continuous mouth opening, the jaw exercises are done for around 1-2 years after the treatment.

The facial asymmetry is to such an extent in bilateral cases, that one needs to get orthognathic surgery done to correct it. The orthognathic procedures include the Sagittal split osteotomy, genioplasty, Extended-sliding genioplasty etc. where the reduced chin is brought forward to make it esthetically better.