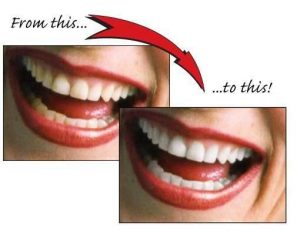 The whitening options include:

This is a procedure which is undertaken in a dental clinic and it can be performed in within an hours’ time. The procedure is expensive compared to other methods. But amazingly, the results are immediate and long-lasting, hence (omit) a worthy choice.

The whitening strips are available in many drug stores, which are sold over-the-counter and they are fairly expensive and really easy to use. The stripes take longer to give the desired results. Moreover, this depends on the peroxide level contained in the stripes. But better is to consult a professional before using them to avoid any damage.

Toothpaste for whitening of teeth consists of a mild abrasive, that can removes, surface stain. Many types of whitening toothpaste have extra polishing agents with special chemicals, which can be effective against stains compared with regular toothpaste. However, whitening toothpaste is not manufactured to actually bleach the teeth.

Whitening trays & gels are fairly effective but, the desired result takes longer compared with the in-office bleaching method. The result depends on the peroxide available in the gel. The clear trays are often worn for several hours in a day or overnight. This could take from 3 days to several weeks before the results are noticed.
There are two types of whitening trays & gels those which are bought over the counter and those bought from the dentist.

Whitening kits purchased from the dentist office generate a faster effect because they contain stronger amounts of peroxide bleaching agents compared with the kits bought over the counter. Another benefit by the dentist trays and gels is that they are designed to fit the teeth. Over the counter trays & gels are not specific in size. Therefore, they may cause the bleaching agent to affect your gum, causing irritation.

How to Safely Whiten Your Teeth with Hydrogen Peroxide: One of the two chemicals most commonly used in over the counter teeth whitening products today is hydrogen peroxide. This is the active ingredient responsible for the whitening results provided by many at home whitening gels, strips, and pens. This powerful chemical can provide great whitening results but care must be taken to use it safely and avoid potential side effects.

What is Hydrogen Peroxide?

Hydrogen peroxide is made up of two atoms of hydrogen and two of oxygen. It takes the form of a clear liquid resembling water but it functions as an oxidizer – a chemical that breaks down into oxygen. Because of this it is has many applications in cleaning and bleaching. For example, it is used to sterilize wounds and bleach hair. Teeth whitening are just one of the many uses of this chemical.

How Does Hydrogen Peroxide Whiten Teeth?

Hydrogen peroxide is a useful whitening agent because it breaks down into water and oxygen. It is the concentrated oxygen released by peroxide that actively breaks apart the chemical bonds holding together the stain pigments within your teeth. Unlike abrasive ingredients like baking soda that can only clear stains off the surface enamel of your teeth, the oxygen from peroxide can penetrate into the porous structure of your enamel and dentin to clean your teeth from the inside out. The yellow or brown discoloration on your teeth is the result of stain pigments from eating certain foods, drinks or from smoking. The oxygen tears apart these pigments at a molecular level, resulting in far whiter teeth than can be achieved with surface level cleaning.