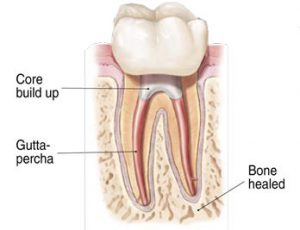 Root canal is a dental procedure which helps in removing the entire internal parts, mainly pulp chamber of the tooth. It also involves the filling of the prepared empty cavity with a suitable bio-compatible material. This procedure is done and advised only when the tooth can not compensate restoring material in a small cavity on the surface. The procedure involves the removal of the nervous elements of the tooth which have been infected or decayed already due to microbial action or any physical pressures.

How is a root canal treatment done?

How many seatings are required?
The dentist would try to make the treatment planning for the ease of the patient, but there are a few factors which decide the amount of chair time and the number of seatings –

Some facts to remember –
Root canals are done to protect a tooth, the calcified tissues of the tooth. This helps in maintaining the jaw integrity. If the entire tooth is extracted, the space in between the adjacent teeth can lead to shifting around of those teeth if a bridge or implant placement is not done rightly there. So, a root canal treatment is advised for the protection of the tooth during an infection.

The thickness of the calcified structure would be considered by the dentist as they are more brittle and can break down. So to maintain and restore a tooth structure, crown placement is usually done.

Any endodontic infection is accompanied with swelling due to inflammation of that region, which occurs after the necrosis or death of the oral tissue. This, if not taken care of, will spread to all the parts of the oral cavity and sometimes would lead to some medical complications in severe cases.

When is root canal advised?

Believe in these before going for a root canal –

Check the root canal symptoms, which can make one understand that they might need to go to the dentist and get things checked if there is a need for the treatment or any alternative is available.