You are here: Home / Dental Tips / Orthodontics – Treatment Of Malocclusion

There are many people who do not have properly aligned teeth. Such people suffer from the problem of malocclusion. Malocclusion is the name given to poor bite. People who have such problem may find it difficult to chew food perfectly and smile effectively. They might feel that their teeth are not looking so good and attractive. Orthodontic treatment is done for aligning the teeth in proper manner. Different types of instruments, removal of teeth and surgeries may be done under orthodontics treatment. Different dentists may give you different advice about the right time to get an orthodontic treatment done. Some dentists say it’s best to get it done at a younger age and some recommend it at a later stage. 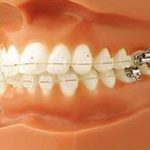 After a period of approximately 2 years, the fixed devices get adjusted automatically and they start exerting enough force for bone remodeling. Once the braces are removed from the teeth, retainers are used for holding the teeth. They can be removed. In case the teeth begin to get back to their earlier position after the braces are removed, the orthodontist may choose to wind up a wire at the back of a few teeth. It helps in holding the teeth in their right position. One may opt for the orthodontic treatment in any age. Now days, new technology and devices have come up. Earlier, braces could be spotted easily. Now, braces which are less visible are used by the dentists.