You are here: Home / Dental Articles / Objectives of Impression making in complete denture

An impression is made for the purpose of achieving a few properties and characteristics in the denture to be fabricated. There are a few principles of making a good impression, but the main factors that are responsible for the long-term satisfactory results of the denture, during impression making are –
1. Retention
2. Stability
3. Support
4. Aesthetics
5. Preservation of Remaining Structures

It is defined (accd. to GPT) as “That quality inherent in the prosthesis which resists the force of gravity, adhesiveness of the foods, and the forces associated with the opening of the jaws”.
There are several forces that try to displace the denture away from the path of insertion. Retention is the ability to resist all these forces.

The factors that affect retention are –

Physiological factors like Saliva. Viscosity of saliva has been a great factor for determining the amount of retention of dentures. Thick and ropy saliva gets accumulated between the tissue surface of the denture and palate, leading to loss of retention. Thin and watery saliva also produces compromised dentures. Cases with ptyalism can lead to gagging. Dentures in patients with the Xerostomia (reduced salivary flow in mouth) condition can produce soreness and irritation. 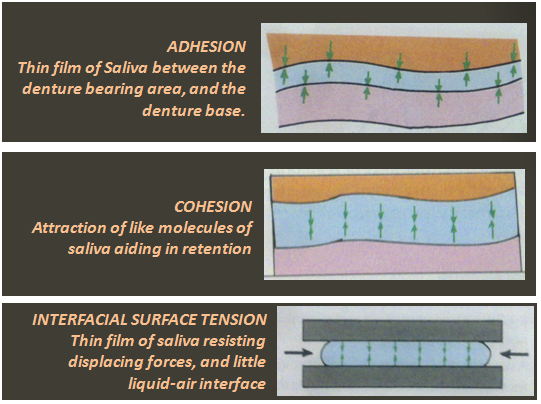 It is defined (accd. to GPT) as “The resistance to vertical forces of mastication, occlusal forces applied in a direction towards the denture-bearing area.”
For a proper support, the denture should be covering as much tissue as possible and this helps in distributing the forces over a wider area. This is termed as snowshoe effect. Support will improve if the forces of occlusion are localized to stress bearing areas, and other areas are relieved.

It is always a matter of concern in complete denture thickness. It is to be seen that the denture and teeth color are in good harmony with the surrounding tissues of the mouth, and the thickness of denture flange is also important. Thick denture flanges usually help in long-term edentulous patients for the required mouth fullness.

Muller de Van in 1952 stated that “The preservation of that which remains is of utmost importance and not the meticulous replacement of that which has been lost.” While recording the impressions, the tissues should be subjected both to stress and relief, so that during the fabrication of the denture, it can be seen that the tissues are not under excess pressure while dentures are being used.
The peripheral tissues should be recorded accurately, so that the over-extension of the denture is prevented, thereby preventing the tissue irritation.