You are here: Home / Cosmetic Dentistry / Dental Crowns or Veneers? Which is the best option for Discolored Teeth

Discoloration of the teeth happens due to one of the several responsible factors, and this could be from the early developmental stages or the late after-eruption stage and thus the way of treating it changes based on the condition. Below we compare the two treatment procedures for the discolored teeth – Crowns and Veneers. Let’s see which would be a better option for the treatment. 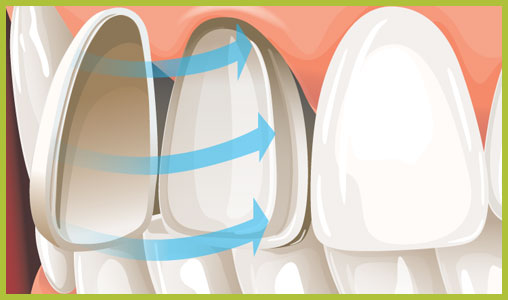 For a Dental veneer to be placed, the Dentist doesn’t need to prepare and remove the discolored surfaces of all sides of the tooth and would just need to do that on the front side and the biting edge, while that for the Dental Crown, the tooth preparation has to be extensive, and at least an mm of tooth surface has to be removed from all the sides. 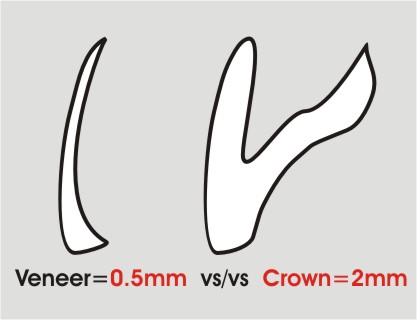 A Dental Crown can be easily indicated and placed for tooth with several problems, which includes the tooth decay, cracks on the tooth and even the gum problems. But with such conditions on the tooth, one cannot easily for the Dental veneers, which are not strong enough to handle even a mid-range pressure of biting, and can sometime get dislodged or broken due to it.

When there is a severe decay of the tooth, the Dentist could suggest the Root Canal Treatment first, and then the dental crown as that is what would provide enough stability and strength to the tooth to make it well replacing the natural tooth crown structure. In this case, a Dental Veneer cannot be of any use.

There are many situations when a tooth which is previously treated for some problem, might be needing a treatment again and that is where the crown would be indicated more. If the tooth was chipped or broken and had a Root canal treatment done, the only option they would be left with, is placement of the crown and a Veneer would not come to any use here.

The patient himself would wish to see his tooth prepared with the minimal damage and thus, when there is just a simple tooth surface discoloration which can be treated with any option, there the Dental Veneer would be a better option where not every side of the tooth is reduced, and this would help for the long-term approach. The Tetracycline stains that are caused due to the drug usage by Pregnant mothers may be treated by the Veneers sometimes.

Lumineers are a type of Veneers alternative, which is an extremely thin layer which can be placed over the tooth surface and this comes to the best use when the patient doesn’t want to compromise with the tooth thickness, and here the Dentist would place the Lumineer over the normal tooth surface without preparing it separately.

The final point is that these two have got different indications and sometimes there’s a choice needed between the both, and where the Veneer is a conservative way of treatment, on the other hand, the Crowns are a stronger way which would work perfectly for a longer time. The final decision could be suggested by your Dentist based on the condition of the tooth and the problem.