You are here: Home / Dental Articles / Learning To Eat With Dentures – A Patient’s Guide

The dentures for your mouth, although might look the best and give an aesthetic appeal, these aren’t really the best and comfortable when you are trying to eat something in the initial stages when you are getting adjusted to it. The looks of the denture are natural, but while eating it isn’t the same, and it takes some time before you get adjusted to it and start eating comfortably. 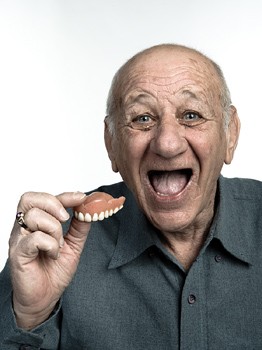 Many a times, people think a lot before getting a denture or consulting their Dentist before getting one, is the doubt about the ability to chew and eat their favorite food which they could easily eat all their life. This is no surprise, because it isn’t the same teeth which were always used, but with some proper care and knowledge about the dentures and their usage, everything can be brought back to normal, and there is nothing really one would need to avoid once they get used to the normal chewing with the new dentures. Try to start eating some of the very basic and easily chew-able food items so that you can understand whether there is a change of force needed or is it the same like it was before the dentures were placed. Then start eating more challenging food until you are getting used to it slowly.

To start off with the practice, it is better to choose a liquid diet, which includes soups and juices and you need to keep in mind that nothing hot should be taken. It should be in the normal temperature. The denture adhesives which are keeping the denture in place, could get loosened if you try to have hot liquids although the sensation won’t be known much because the dentures don’t give the same sensitivity as the natural teeth used to do earlier.

Also read: How to care for your dentures

In the initial stage of denture usage, you won’t be really feeling much about the taste but it would be more about the chewing, forces put by the jaws against each other while trying to chew the food and this would gradually get reduced, and once you get used to it, the taste sensation would be back to normal.

While trying to chew something, avoid using much force and avoid biting down hard with the front teeth because this could give an impact to your jaw bone too, if you make a habit of it. You should take small bites with the front teeth, and until you get an understanding of the force needed always, do not try to put a lot of force. It would be good if you are trying to eat on both the sides at the same time from the initial stages, but if you cannot, then eat from right side and then left side to create a balance, rather than looking for a comfortable side to chew more from there always.

For those who wants a fixed denture using some adhesives, choosing the right one is very important. There are a lot of denture adhesives available, but the ones such as Polident Strong Hold and Fixodent Control are the best ones to choose from, because they keep the dentures fixed at the particular place, and also would prevent the entry of the small food particles ad grains under the denture surface. These denture adhesives can be used on any type of denture – Partial denture, full denture, upper and lower complete dentures.

It anyways isn’t going to be an easy task in the early time for you to get acclimatized to the condition after wearing a new denture for the first time, after using your natural teeth to chomp down anything for decades, but you have to decide for yourself whether to give up or start practicing and getting used to these new dentures for the long term eating habits. Confidence is another important things that you will need to get going with these dentures and using them.