Candidiasis refers to yeast infection which is caused in the mouth. Yeast infection may also appear in other parts of the body. Here, we will be talking only about oral yeast infection. This disease may occur to anyone irrespective of his age and sex. Candidiasis is generally observed in those people who have a weak immunity system. Following are some of the causes of this disease. 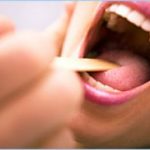 Candidiasis of mouth is also known by the name of Oral Thrush. The most common symptom of this disease is the appearance of lesions in the mouth. White lesions appear in the mouth at the gums, top of the mouth, inner cheeks and tongue. These lesions may cause pain or bleeding when you brush your teeth. In extreme cases, lesions may spread up to the esophagus. This may cause problems in gulping the food. Fever may also occur in case the lesions spread beyond esophagus.

Candidiasis of mouth can be treated easily in those people who are healthy. However, those people who have a weak immunity system are difficult to treat. Antifungal pills and methods are recommended for the treatment of this disease. The treatment may take around ten to fourteen days. The medication for this disease may come in the form of liquids and tablets. The dentist prescribes different medications for different people according to their gender and age. As this disease may be indicating to some other serious health problem, a dentist may advise people to seek the help of a doctor as well.