You are here: Home / Dentistry / What are Dental Sealants?

The modern dentist has an increasingly sophisticated arsenal available to aid patients in fighting tooth decay. One member of this arsenal, the dental sealant, has been available for 25 years continually undergoing refinements. 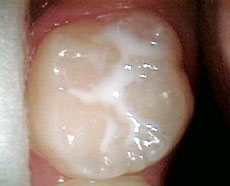 Due to the nature of the molars, intrinsically having numerous fissures and microscopic cups, they are far more difficult to clean and more susceptible to decay. And although increased widepsread public health measures to help combat decay such as fluoridation and vastly improved dental hygeine methods, molar decay remains a consistent threat to healthy teeth. Dental sealants were developed in the 1960s and 1970s to help combat this susceptibility.

Dental sealants are used to cover and close the small fissures and cups that harbour plaque and eventually decay. The application is usually performed by a dentist and involves painting a uniform layer of resinous plastic sealant on to the teeth. The compound used is very similar to that used to create “white” plastic fillings.

The plastic compound is then set by focusing blue spectrum natural light on it. Once cured, the plastic sealants form a thin, smooth, highly durable layer over the treated regions. Since the molar’s surface has been smoothed out, regular brushing becomes far more effective at removing plaque.

In spite of near continual use, and the many high stresses and strains applied to teeth through biting and chewing, the cured seal can last for upward of 5 years but should be inspected regularly for damage. In the event of damage to the sealant, a new layer of sealant can be applied over the corrupt areas.

Despite dental sealants being close to 100% effective in preventing decay in molars and it being an only moderately expensive treatment, it is estimated that fewer than 25% of the population have dental sealants.