You are here: Home / Oral Surgery / Management of the Hematoma as Local Anesthesia Complication – Immediate and Subsequent

It depends a lot on the timing after the Local Anesthesia, when the Hematoma is formed and when you detect it. If at all the hematoma formation is detected immediately after the LA is administered, one can apply finger pressure on particular areas based on the LA given, but on the later stages there are different precautions and steps to be followed if the Hematoma doesn’t subside immediately. 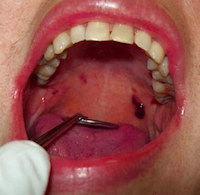 Whenever local anesthesia is given, and this is followed by the formation of a swelling of any size, its advised to apply direct pressure on the site where there is the swelling or bleeding or the accumulation of blood. For most of the cases, the blood vessel lies in between the skin and bone, and when the injection leads to bleeding, the pressure has to be applied in these areas for more than 2 minutes. This way of management would effectively stops the bleeding.

Hematoma due to Inferior Alveolar Nerve Block:  Whenever hematoma occurs due to the administration of the Inferior alveolar nerve block, the pressure has to be applied to the medial aspect of the mandibular ramus. Clinical manifestations of the hematoma are intraoral: possible tissue discoloration and probable tissue swelling on the medial (lingual) aspect of the mandibular ramus.

Hematoma due to Anterior Superior alveolar (Infraorbital) nerve block: Pressure has to be applied to the skin directly over the Infraorbital Foramen. Clinical manifestation is discoloration of the skin below the lower eye lid. Hematoma is unlikely to arise with Anterior Superior Alveolar nerve block because the technique described requires application of pressure to the injection site throughout drug administration and for a period of 2 to 3 minutes after, thus there is no potential injury or cause for Hematoma.

Hematoma due to Buccal nerve block or any palatal injection: Place pressure at the site of bleeding, and it would slowly get reduced. In these injections the clinical manifestations of hematoma are usually visible only within the mouth.

Hematoma due to Posterior superior alveolar nerve block: The Posterior Superior Alveolar (PSA) nerve block usually produces the largest and most esthetically unappealing Hematoma. The Infratemporal Fossa, into which bleeding occurs, is a place that can accommodate a large volume of blood. There is a colorless swelling that appears on the side of the face, usually a few minutes after the LA administration, and it is only then the Hematoma is recognized. The size increases over a period of days, both inferiorly and anteriorly towards the lower front region of the cheek. Due to the location of the blood vessels that are involved, it becomes difficult to apply pressure on the site where the bleeding is occurring. It is also relatively difficult to apply pressure directly to the posterior superior alveolar artery (the primary source of bleeding), the facial artery, and the pterygoid plexus of veins. They are located posterior, superior, and medial to the maxillary tuberosity. Bleeding normally ceases when external pressure on the vessels exceeds the internal pressure or when clotting occurs. Digital pressure can be applied to the soft tissues in the mucobuccal fold as far distally as can be tolerated by the patient (without eliciting a gag reflex). Apply pressure in a medial and superior direction. If available, ice should be applied (extraorally) to increase pressure on the site and help constrict the vessel.