You are here: Home / Dental Articles / What is an Alveolar bone?

The alveolar process is the bony part and it has 2 parts on its own –
1. Alveolar bone proper
2. Supporting alveolar bone 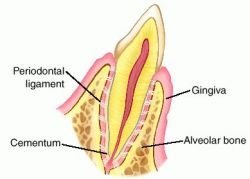 Alveolar bone proper is present just adjacent the tooth socket around the root and it gives the attachment to the periodontal ligament fibers, which are the principle fibers. These fibers which enter the bone are regarded as Sharpey’s fibers. And the bone which is the lodgement site for the fibers is called as the Bundle bone.