You are here: Home / Miscellaneous / 2 Bomb Blasts in Hyderabad

Serial bomb blasts occurred in one of the most remote places, Dilsukhnagar in Hyderabad on 22nd February 2013 at around 7 p.m. when the suspected terrorist bombing happened near the Venkatadri Theater and Konark Theater in Dilsukhnagar where the area is very active during evening time. Reports say that around 22 people have been confirmed dead, and more than 50 are injured.

Yesterday night was something terrible in our city center, where 2 bomb blasts  took place  in high traffic areas, one in a place called Gokul Chat, where many people hangout to have some hot snacks. The other blast took place in Lumbini park, a tourist spot and there a laser show was going on. 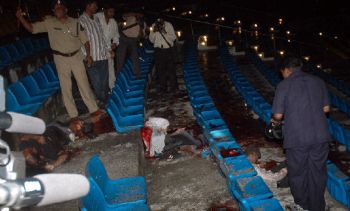 There were more than 30 people feared dead and more than 60 people were injured. These blasts occured near 8:10pm in the night. The injured were shifted to hospitals. The condition of many is said to be critical. Medical and para-medical staff at the Osmania General Hospital were struggling to cope with the situation.

40 engineering students from Nasik were watching the laser show together in Lumbini park and the blast took place near them.

The police arrested 4 people related to these blasts, but nothing is clear. And now, it has become hard for us to go to the city center places, and the most visited places where in open areas these kind of blastings are taking place. If this bomb was more severe, the Secretariat in front of Lumbini park would also have rocked.

People should be safe, and be alert in public places, or else it is just unsafe everywhere.